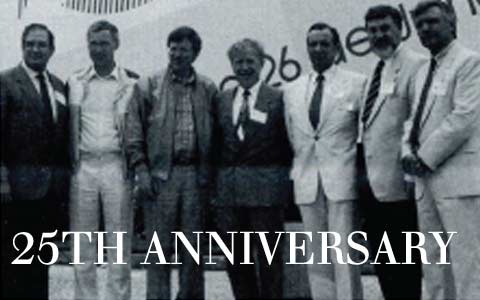 This year marks the 25th Anniversary of the Pentecostal European Fellowship (PEF), which was formed in 1987 during the PEC in Lisbon (Portugal).

The EPF (European Pentecostal Fellowship), launched in 1966 in Rome (Italy), developed into an annual fraternal gathering of Pentecostal leaders across Europe, under the chairmanship of the late Rev. Eric Dando (United Kingdom), later succeeded by Rev. Reinhold Ulonska (Germany).

The PEC (Pentecostal European Conference) began in 1969 in Nyhem (Sweden), as an initiative of Pastor Lewi Pethrus (Sweden), who appointed Rev. Jacob Zopfi (Switzerland) as the chairman of PEC, a triennial conference held in numerous European cities since then.

In 1987, the two streams EPF and PEC merged into the PEF. Jacob Zopfi served as its Chairman
until 2001, when Pastor Ingolf Ellssel (Germany) was elected as the new Chairman of PEF.

In 2005, the PEF adopted a Constitution and received legal recognition in Belgium as an international non-profit
association. In the same year PEF opened its head office in the Brussels area, and hired a full-time Coordinator
serving there.

Today, PEF has 53 national members in 36 countries, plus other associate members and fraternal contacts, representing some 2 million Pentecostals in Europe. Since 2011, PEF is also a member of the Pentecostal World Fellowship (PWF), representing our global Pentecostal family.

Under the leadership of Chairman Ingolf Ellssel, PEF has strengthened its evangelistic vision by mobilizing young people around Europe for city-wide outreaches in
the capitals of Europe. After Helsinki (2000) and Berlin (2003), IMPACT outreaches have taken place in Brussels (2006), Oslo (2007), Madrid (2008), Vienna (2009), Stockholm (2010), Budapest (2011) in conjunction with parallel Pentecostal conferences. The next Impact/PEC will take place in Luxembourg (July 21-26, 2012).

The vision for a greater spiritual impact on Europe is carried by PEF and is being implemented through its branches: PEM, PEFY, EPPA, PEF-W, PEF-SM, PEF-African churches, and other networks, including our cooperative fellowship with EPTA.

To God be the glory for what He has done and what He will continue to do through PEF!

NORWEGIAN YOUTH ON FIRE FOR EUROPE

Impact Luxembourg 2012 – A Unique and Inspiring Outreach
We had a great Impact outreach in luxembourg from Monday to Saturday (16- 21 July). Our theme was "HOPE that does not fail" (from Romans 5:5), which was also written on our t·shirts. Today many have lost their hope, but we wanted to remind people that there is still a hope that doesn't fail in Jesus.
About PEF