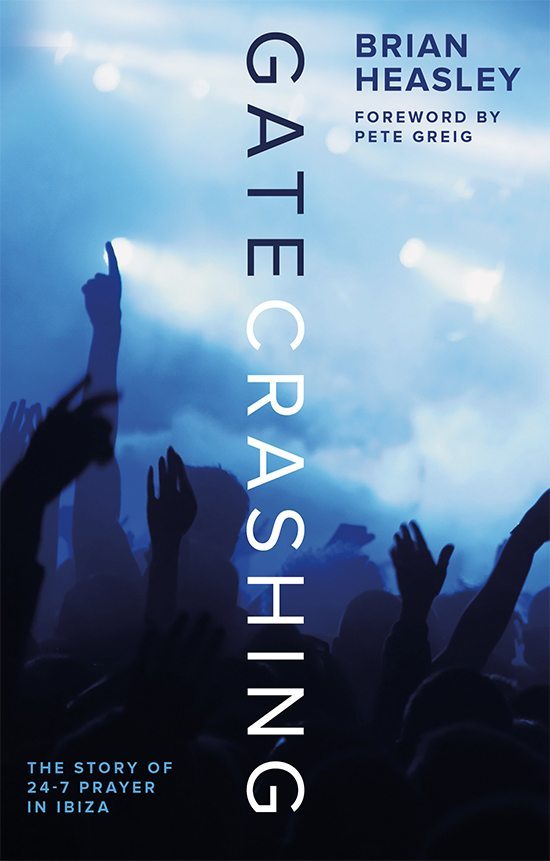 These words are from Brian Heasley, author of the book ‘Gatecrashing – the story of 24-7 prayer in Ibiza’. Brian and his wife Tracy directed the prayer and mission centre 24-7 Ibiza for eight years. The little island of Ibiza in the Balearics, just off the coast of Catalonia, has long been the favourite destination of clubbers trying to forget their daily lives for some nights at the discoes. What started as a prayer project has become through the years a work greatly appreciated by tourists, bar or disco workers, prostitutes and also the local authorities.

Inspired by the Holy Spirit

Brian and Tracy, then a pastoral couple of a small Pentecostal community in a village of the county of Norfolk in England, felt a holy dissatisfaction grow in their hearts. The Holy Spirit started a work in them that would direct them into an environment they were totally unfamiliar with. After several months of a series of events confirming their call, they left their native England to go and live in Sant Antoni de Portmany, on the island of Ibiza.

In the midst of what the British media had described as a ‘modern Sodom and Gomorrah’, this couple discovered (with a very understandable feeling of powerlessness) this mountain of depravity with their own eyes.

Brian and Tracy had no strategy, but they started walking regularly on the streets of the city to pray, expecting to see God move. With time, what had started as a 24-7 prayer movement became what Brian defines a ‘prayer and mission’ centre. Little by little, the Holy Spirit would inspire them to all kinds of action, such as bringing back drunk people to their hotel rooms, offering care to prostitutes (often victims of human trafficking) or even allowing local workers to come to the centre to surf on the internet or play video games.

Each summer, Brian and Tracy received prayer teams for a given period. Together they practised a rhythm of prayer and mission, alternating an hour each night in the prayer room with an hour on the streets of the West End of the town, the area of the bars and discoes. The hour in the prayer room was necessary to ‘inhale’ the presence of God, and then the hour on the streets was dedicated to ‘exhaling’ that very presence. The teams went on the streets to meet those that the Holy Spirit would place in their hearts. Generally, the simple question, ‘Is there anything you would like us to pray for you?’ provoked thousands of positive answers.

Back home and towards new adventures

After eight years of prayer and mission in Ibiza, it was now time for Brian, Tracy and their sons, to get back to Norfolk. While the work of 24-7 Ibiza keeps going with other people, Brian now coordinates the 24-7 UK national network. Today he teaches and encourages the church to live out the rhythm of prayer and mission, something he shares from his own experience. From our side, we have the privilege of receiving his precious insights on a regular basis.

Thank you, Brian, for your friendship!