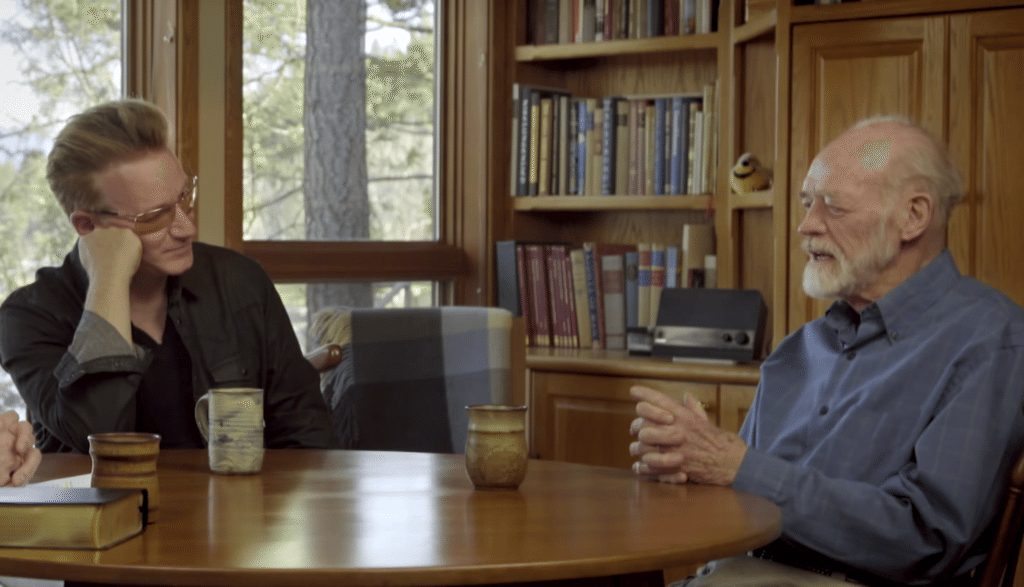 Bono and a theologian

What does Bono have in common with a white-haired scholar? At first glance, the Irish rock star and the American theologian Eugene Peterson seem rather different. However, the answer is perhaps not totally unpredictable for those who know enough about Bono. In fact, quite naturally, the answer has to do with the quality of their faith: both live it with startling honesty. I recently had the pleasure of watching a short documentary about the friendship between these two men. Their acquaintance started in a fairly humorous way: Bono had enjoyed Eugene Peterson’s translation of the Message Bible and had voiced his thanks to him in a video greeting. But as Peterson had hardly even heard of him, he wasn’t particularly impressed by the greeting! Later, however, when the two men finally met, their unlikely friendship blossomed. They appreciated each other’s honesty and simplicity of faith.

A rule of thumb that Peterson and Bono both seem to live by is actually found in one of the psalms of the Message Bible “Never hide your feelings from him” (Psalm 34:5). In the film mentioned above, Bono regrets the dishonest nature of most Christian music nowadays and calls for honest lyrics. As Peterson phrases it: “We need to find a way to cuss without cussing”. In the Bible, there are numerous examples of brutal honesty before God. The story of Job is just one of them. When his wife prompted him to “curse God and die” (Job 2:9), Job refused. And yet he didn’t just grit his teeth through the pain. He found a way to express his feelings.

To my surprise (and probably to the surprise of most modern-day readers), God seemed okay with this. Another book full of vulnerable honesty is the Psalms. The writers of the psalms speak of their enemies as precisely that – enemies. They don’t call sicknesses “symptoms” or enemies “a friend just waiting to be made”. The poets of the psalms simply empty their pockets before God and meet with Him heart to heart. As Bono claims, the writers of the psalms are vulnerable before God, in a good way. Why is it that most of us would never dare to speak like Job or some of the psalmists did? Why is it that we find it so hard to reach this attitude of heart?

Perhaps one of the greatest risks in prayer is in our being used to it. We risk praying off the top of our heads instead of from the bottom of our hearts. Yet when we check through Biblical examples, we find prayers with flavour. They have been prayed in real situations by real people who are trying to come to terms with their real lives. And God seems drawn to prayers from the heart. Why is it, then, that our prayer lives can sometimes become a repetition of religious phrases instead of interaction with a living Person? Perhaps one of the reasons is that we have misconceptions about God. Perhaps we fear being open to Him or being corrected by Him, and don’t enjoy exposing our messiness. Perhaps we would prefer not to even look at ourselves honestly, let alone pray from a place of honesty! I can imagine God sometimes sighing, sometimes laughing at our desire to keep up appearances with Him. Yet honesty is a prelude to intimacy. As Peterson says in the documentary, “praying isn’t being nice before God”. It is being real.

The truth is, we need to be as honest as we can in prayer for our own sake, not for God’s! We need a possibility for self-expression – to be able to blow off steam without blowing up. I find Bono’s challenge to be honest before God a relevant reminder for us all to pursue a real relationship with God: Let’s learn to have naked hearts before God.

To watch the full documentary click on this link.